Our shared racist past surfaced in “Neighbors”

People can be color-blind when it comes to race. In fact, skin color doesn’t even matter.

Based on that idealistic credo — the legacy of the civil rights movement and ’60s egalitarianism — Richard and Jean Patterson, an interracial couple who are the subject of a brilliant new play, “Neighbors,” marry. He’s black, she’s white. The two spawn a beautiful biracial daughter, and dwell in the suburbs near the university where Richard, a professor, pursues an academic career. Jean’s a stay-at-home mom, having long abandoned her dream of being a poet.

An uncouth set of new neighbors moves next door. It’s a mundane event — who among us hasn’t gone through it? But in playwright Branden Jacobs-Jenkins’ brazen imaginings, what’s landed next door is Richard Patterson’s worst nightmare. It represents everything he believes he has left behind in his quest for upward mobility.

The dramatic impact of this event on the Patterson marriage is the stuff of “Neighbors,” now at the Matrix Theatre Company on Melrose Avenue. It comes to L.A. after workshop development at New York’s Public Theater.

If you take the characters at face value (and I don’t), the new neighbors, the Crows, are a family of thespians. That’s putting it mildly. In fact they’re an audacious gang of minstrel performers. Each member of this band of gypsies conjures a hugely offensive black stereotype that director Nataki Garrett delivers to her audience with just the delicacy and nuance minstrelsy deserves: none.

The Brooklyn-based playwright, precocious at 26, now works in Berlin on a project about 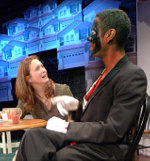 black soldiers stationed in Germany. Every element of his vivacious play is fresh, alive, and communicates. It’s wildly intelligent, unafraid, and wickedly funny.

Does “Neighbors” put an end to the liberal fantasy that race doesn’t matter? Or, does it give idealism new urgency? One wonders if Jacobs-Jenkins is visionary or cynic. My hunch is that through “Neighbors,” he’s working it out.

There’s a line in the play where one of the characters muses, “I wonder where that memory went.” 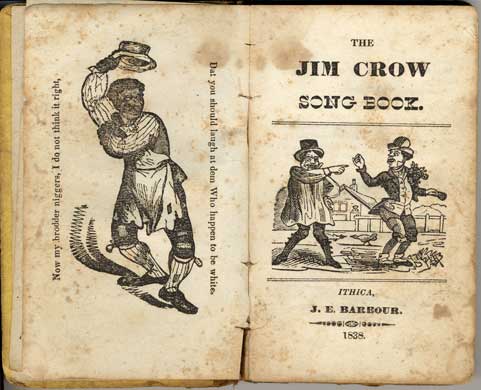 Jacobs-Jenkins seems to pose this question to us all concerning two centuries of hateful cultural baggage Americans would rather avoid.

At left: This songbook, published in Ithaca, New York, in 1839, shows an early depiction of a minstrel-show character named Jim Crow. By the 1890s the expression “Jim Crow” was being used to describe laws and customs aimed at segregating African Americans and others.