Jack Cole to be celebrated at Jacob’s Pillow 2 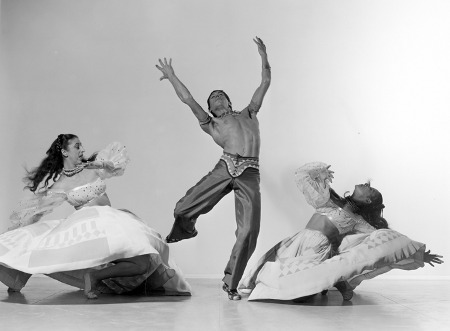 arts·meme‘s Debra Levine is proud to announce her participation, on Saturday, August 14, at 4 pm, in “Jack Cole, Unsung Genius” a celebration of the innovative jazz choreographer at Jacob’s Pillow Dance Festival, the summer dance camp for grown ups in Becket, Massachusetts.

After Denishawn’s demise circa 1931, Cole became a member of founder Ted Shawn’s men’s group. Shawn himself begat the Jacob’s Pillow festival, donating his farm in the Berkshire Mountains as a summer retreat for modern dancers. Great modern-dance choreographers, from Graham, Humphrey, and Limon up through Bill T. Jones, created and performed important works at Jacob’s Pillow.

In the photo above, you can see imposing physicality of the dancer Jack Cole. Note the sculptural detail as Cole reaches skyward and the two women claw toward the ground. Cole has a great eye for levels — using staircases or platforms as dancing props, or just using the body, he was a master of leaps and low-to-the-ground choreography. 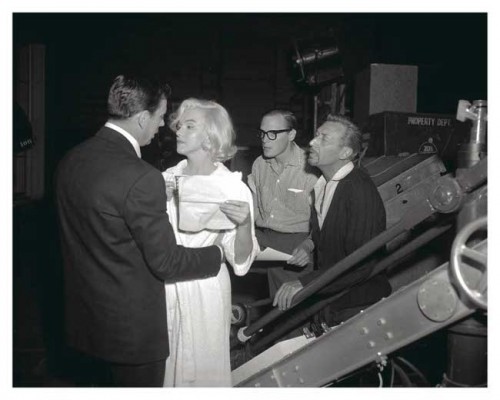 Above we see Cole coaches Marilyn Monroe, not on her dancing, although he did that too. Here, in rehearsal with Yves Montand for “Let’s Make Love” (1960), he appears to be helping Marilyn with dialogue or singing.

When did you meet Marilyn?
When I first came out and started working with Billy [Wilder] in ’53. She was rehearsing a musical at 20th—I remember she was doing a dance routine with [the choreographer] Jack Cole on a hot, sweaty soundstage in grungy rehearsal clothes, all covered with sweat, and she was just edible—glorious.