bobrauschenbergamerica at [inside] the ford 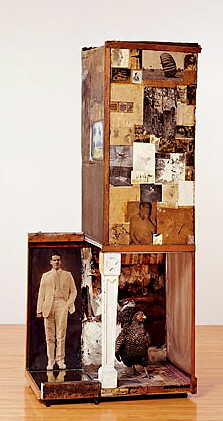 "Art was not a part of our lives," states a figure representing the famous artist's mother in bobrauschenbergamerica, now on view at [Inside] the Ford, the friendly cavernous indoor space tucked below the Ford amphitheater on the Cahuenga Pass. It's the first-ever Los Angeles staging of the 2001 play written by Charles Mee.

Describing her creative son, she recalls, "he was a sweet boy, he loved his bicycle," as if grasping for the reason the son of a Texas small town forged some of the most adventurous work of his generation. A master manipulator of found objects, Rauschenberg's passing in 2008 was the loss of a figurehead of the post-abstract-expressionist era.

The "combine" (his word) of collage, painting and sculpture, at left, ("Untitled," 1954) is one of the Rauschenberg works that live in our city at L.A.'s Museum of Contemporary Art.  "Small Rebus" (1956) is another. Both are good friends of mine.

Mee's play is not biographical of Rauschenberg per se. It's a theatrical collage, a cluster of potched together scenes illuminating a group of colorful characters — the flotsom-and-jetsom of the American landscape — as they ruminate on the meaning of it all, particularly about love. In its episodic nature and sensibility (and its set decoration by Marina Mouhibian) it evokes the great multimedia artist. The playwright notes he was "trying to think if Rauschenberg had been a theater maker instead of a visual artist. It's a look at the world through his eyes. It's not about him. It doesn't look at him; it looks at what he looks at."

TheSpyAnts Theatre Company, a decade-old virtual theater group (i.e., homeless, but in a nice way, although, ironically, one of the strongest performers, Brett Hren, plays a bum) occupies the Ford with this extremely amusing show through the end of February.

The [Inside] the Ford space, created in 1998, was the Center Theater Group "Taper Too" venue for decades. Its lobby was recently redecorated by students from Otis School of Design, and the theater cannot be cozier or more accessible; there's free parking and even a pay-what-you-can policy. The well-maintained Ford campus, with flowing water fountain and picnic areas, is a Los Angeles oasis all year round.