A slice of Lewis Klahr’s life 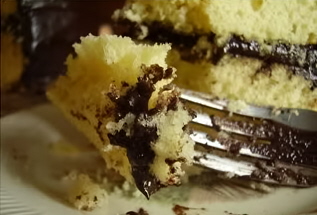 I understand this statement. I also get the intense spewing of fetishized objects — artfully collected, cut and pasted, and then animated — in Klahr’s amazing films.

Critic J. Hoberman in the Village Voice calls the collage artist the “reigning proponent of cut and paste.” A self-described “anxious Jew” (I get that one too), Klahr has been making films since 1977. We saw two: his early series “Picture Books for Adults” (1983-85) and his cutout epic “The Pharoah’s Belt” (1994). The screening took place at one of my favorite venues, the refurbished Union Theater, aka The Velaslavsay Panorama, in the historic Pico-Union neighborhood of Los Angeles. 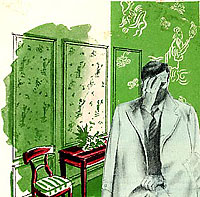 Watching the films I felt I was seeing the world through the eyes of a male version of myself. Klahr was born in 1956 close to my birth year. It makes perfect sense to me, therefore, that common suburban living room decor (he likes a good, bland sofa, for example) sets the stage for his Ninja warriors (I had similar fantasies — but about dancing girls, and they took place in my grade school playground).

One dominant image in his brilliant and obsessive “The Pharoah’s Belt” is a moist-looking (at one point it sweats butter) slice of Betty Crocker yellow layer cake. Propped up against this weighty wall of dough is a boy; he’s supine, breathing deeply and with difficulty. With each labored breath, the lad’s heart pops from his chest through his mouth. What a concept! A child, prone, ill, suffering, propped against a piece of icky cake and gaining sustenance from it. Wrenching and disturbing. 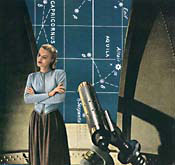 Because … the cake’s a fake … a mouth-watering slab of pornography. It oozes fat, voluptuousness … and promise. Objects slither along its icing like a chocolate sliding board. For example, a tiny bottle of Clorox bleach wends its way down a vertical canal of cake frosting.  (Is that Klahr-ax?)

It’s way crazy, but while it happens you go along for the ride. One reason is that the film is just gorgeous, drenched in primary colors, its objects lovingly curated for a pleasant sensual journey. Another is the film’s sweet tone. Klahr accentuates not just the kitsch but the beauty elements of his objects.

The voyage through Klahr’s nutty sensibility could find no better setting than Sara Velas’s charmingly funky refurbished movie theater. Early next year, Sara plans to (literally) roll-out a new panorama scroll based on found documents of a voyage from East to West coasts via South America during the Cal Gold Rush.