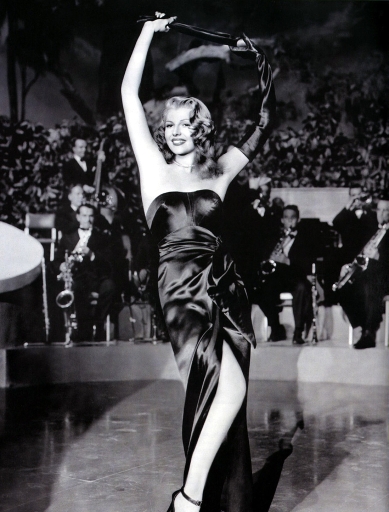 In this coming Sunday’s Los Angeles Times Calendar section you will find my article about choreographer Jack Cole who coached Marilyn Monroe in movement over the course of six of her films. Most famously, he choreographed “Diamonds are a Girl’s Best Friend” from Gentlemen Prefer Blondes.

Jack Cole also choreographed “Put the Blame on Mame” for Rita Hayworth in Gilda, at left.

I’m a dance critic. But writing primarily about ballet and modern dance, I had only vaguely heard of Cole, a jazz dancer. It was Kenneth Anger who spurred my curiosity in casual conversation at a Hollywood Heritage film event. Kenneth knew Jack Cole in Paris in the 1950s and told me how disturbed he was that Cole’s name has disappeared from the public arena.

Another L.A. Times piece about Ballets Russes dancer Theodore Kosloff, who acted in 20+ silent films for Cecil B. DeMille had its genesis in a similar film-event conversation. In Kosloff’s case, the dancer/actor’sname fell easily from the mouth of Marc Wanamaker, another amazing classic-film person in our city.

I am a dance expert — but a mere film fan. I depend on these events to learn, grow, and get story and research ideas. The LACMA film program has been central to my film education for the last twenty years.

I learn *zero* from watching film classics at home on DVD. I learn *everything* by getting out to watch film with others, chatting and learning from the great experts who live and work in this town.

LACMA: Save our film program. Facebook people can join Save LACMA Film group. We have a petition that is nearing 1,000 names. Please sign it.