This is a bizarre personal twist to a story affecting our community. 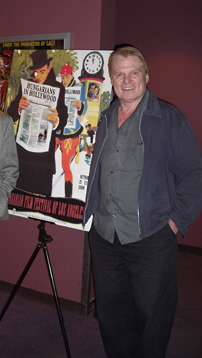 On Tuesday July 28 I did something I have never done before. I sent a proposal for a series on dance and film to Ian Birnie, the erstwhile head of LACMA’s superb film program.

The subject was choreographer Jack Cole whom I have been researching for an L.A. Times story. Birnie had expressed his interest in how many famous 1950s musicals feature Cole’s work — and the fact that no one knows about it. Perfect programming fodder for LACMA.

The next day, Wednesday July 29, LACMA announced the cancellation of the 40-year program and Birnie’s firing.

How weird is that? In fact I would not take my proposal anywhere but to Ian Birnie. Ian’s steady presence running this rigorous program in the heart of Los Angeles for the last 13 years; his deep knowledge and passion; and his accessibility to the normal Joe put him in a rare category.

Here’s an L.A. Weekly article that recounts contrast between Birnie and his boss, Michael Govan.

In a press release written in admirable corporatese (e.g., Birnie is not being canned, he’s being “restructured,” although he has done a “marvelous job”), LACMA Director Michael Govan says how necessary it is to put the kabosh on the underfunded program and instead install one featuring “artist-created” films. This comment has Truffaut, Kurosawa and John Ford turning over in their graves … and it’s putting *me* into an early one.