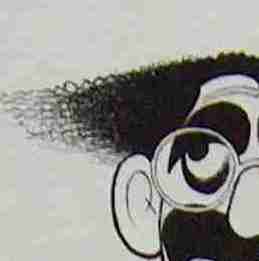 When asked who was quickest with a one-liner, Groucho responded: George S. Kaufman, Oscar Levant … and Irving Brecher.

Brecher was a comedian and screenwriter whose credits include the Marx Bros’s final two movies at MGM: At the Circus (1939) and Go West (1940). He was good buddies with Groucho but hung out with Harpo and Chico as well. This lore comes from author Hank Rosenfeld who befriended the aging Brecher and toured the Jewish delis of Los Angeles with him, noshing on corned beef and tape-recording Brecher’s memories. The resulting book, The Wicked Wit of the West, had a fun presentation at Sunset Boulevard’s esteemed bookshop, Book Soup.

How would you reduce the Marx Brothers to one word? Carl Reiner took a stab: "surreal." Larry Gelbart called them "anti-authoritarian."

Brecher had a good life in this town. He was a member of Hillcrest Country Club, where Jews played golf when they were not welcomed at Los Angeles Country Club. There he swapped schtick at the comic’s table with George Burns, Milton Berle, Jack Benny, Jan Murray, and George Jessel. He held a connoisseur’s distinction between "comics" and "comedians." As best I could understand it, a comic says things funnily (e.g., by talking in a funny voice, like Ed Wynn) and a comedian is more of an actor, like Jack Benny. Comedians, I believe, ranked higher with Brecher.

Mervyn LeRoy engaged Brecher to "punch up" the much worked-over screenplay of The Wizard of Oz. The Bronx-born Brecher also penned the ultra-Americana musical, Meet Me in St. Louis, and his last writing effort was teen musical Bye Bye Birdie. The latter has an upcoming screening, with curtain talk by Rosenfeld, at the Aero Theater in Santa Monica on 11 June.