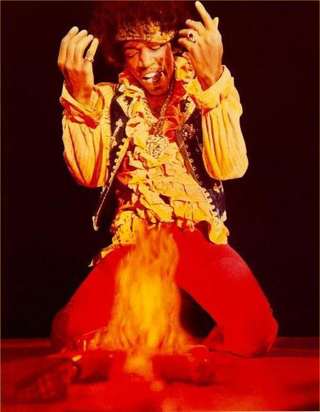 Urban legend has it that after a druggy night at a hippie crash pad in Los Feliz, Jimi Hendrix composed “Purple Haze.”

According to the story, Hendrix was inspired by a psychedelicly painted bathroom.  The erstwhile hippie house — now a designer’s emporium and yet another L.A. real estate event — sits atop a hill overlooking my apartment building.

That means that in approximately year 1966, when I was being a good grade school pupil in suburban Pittsburgh, Jimi Hendrix was gazing down on my future home.

That’s huge. And a reason to live in L.A. Lately, I need one.

Wikipedia disagrees with this theory about Purple Haze, but what does Wikipedia know?

I absolutely revere Jimi Hendrix. Here is The Experience playing Purple Haze.  Do I hear a symphony orchestra?  No, it’s just the sound of one man and his electric guitar.

One comment on “Jimi Hendrix hung out in Los Feliz”